At least 50 high school football players in the U.S. have died from heat stroke after falling ill on the field in the past 25 years. And high school athletes in other sports are not immune from the risks — female cross-country athletes are twice as likely to suffer from heat-related illnesses as athletes in any other high school sport.

The numbers are especially shocking when you consider that heat-related illnesses and deaths are entirely preventable.

While sports equipment has improved over time to protect against concussions, young players and college athletes are facing increasing risks from rising heat.

We study sport ecology and legal aspects of sport. With summer temperatures rising, we believe many youth sports leagues and school districts will need to aggressively update their practice rules and heat policies to keep their players safe. We suggest particular attention be paid to low-income, minority neighborhoods and regions that can get excessively hot.

Each year, summer marks the return of discussions of just how severe the sweltering heat is. Nine of the 10 hottest years on record globally have been since 2012, and this year’s late-spring and early-summer heat waves were previews for what forecasters warned would be a brutal summer of 2022.

Yet many interscholastic and preparatory sport summer camps have kids running hard through the summer months, sometimes on days that reach triple-digit temperatures. 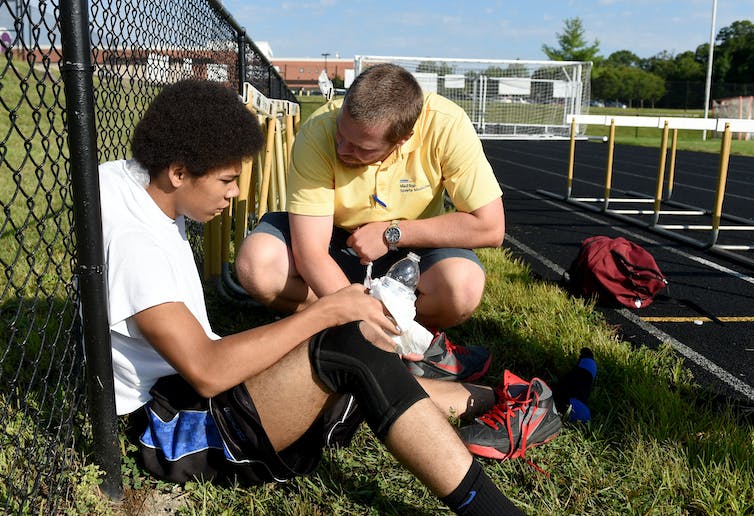 An athletic trainer helps a teenage football player who had trouble after running during August training at a Maryland high school. Jonathan Newton / The Washington Post via Getty Images

Heat is the most frequent climate-related killer in the United States, with more deaths associated with it than tornadoes, floods and cold temperatures. And days of extreme heat and humidity are now surpassing concerning levels for human health. Overall, the Centers for Disease Control and Prevention reported an average of more than 700 heat-related U.S. deaths each year between 2004 and 2018. Some of the hottest years ever recorded have happened since then, and preliminary data detailing heat deaths in the U.S. indicates the rate increased 56% from 2018 to 2021.

For high school athletes, the prevalence of extreme heat is leading to escalating heat-related illness, injuries, hospitalizations and deaths. In fact, heat stroke is a leading cause of death in sports.

Unsurprisingly, the greatest concentration of heat illness in young athletes occurs in August: the back-to-school and back-to-sports season.

Recognizing the warning signs can be especially challenging for children and teens. Young people are still learning how to communicate their feelings and experiences, and that can be more difficult in sport environments that promote toughness and perseverance. Ultimately, young athletes must trust adults to protect them.

Evidence suggests the prevalence of exertional heat stroke among high school athletes is largely due to young athletes’ not acclimatizing, or physically adjusting to the heat, particularly in the first few weeks of practice. Although heat policies related to temperature and hydration exist at the high school level, they aren’t always enforced. And they may need to be improved to reflect the warming climate given the rate of heat illness. 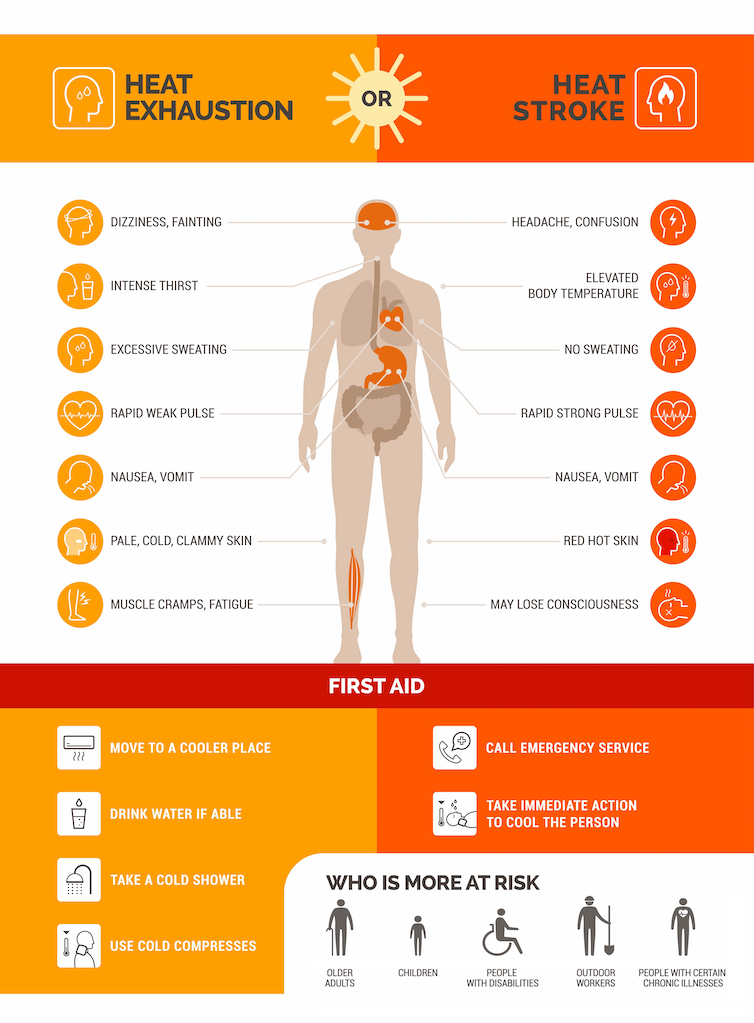 Signs of heat illness and what to do. Elenabs via Getty Images

As a result, parents and guardians are faced with how best to advocate for their children.

In some cases, families have sued after heat injuries, both to recover money for their child’s suffering and to drive change in the hope that no other child will have to endure what others have. However, the heat injuries continue to rise.

Adults’ responsibility to keep children safe in sport settings becomes blurry as the growth in legal challenges related to heat illness demonstrates a disconnect between adults’ duty of care and athletes’ well-being. Negligence is a common claim associated with these lawsuits. Allegations of child endangerment or wrongful death can lead to civil or criminal legal disputes. But can reactive legal action prevent these heat injuries in the long run?

The fact that heat injuries are preventable is often why legal cases alleging negligence and wrongful death are successful. Still, heat stress, heat exhaustion, heatstroke and sunstroke are not uncommon in sports. Medical researchers have described heat illness among athletes as one of the most prominent pieces of evidence of climate change’s hazards and effect on sport.

For example, non-Hispanic Black Americans suffer heat-related deaths at a rate higher than the U.S. average. That doubles for Indigenous and Native Americans, who report the highest death rate from heat.

For athletes, the consequences of extreme heat can further complicate environmental and climate injustice. For instance, racial minorities and those in lower socioeconomic brackets have greater chances of living in the warmest areas, including urban heat islands, where heat trapped by pavement and buildings can make temperatures several degrees hotter than the city average. 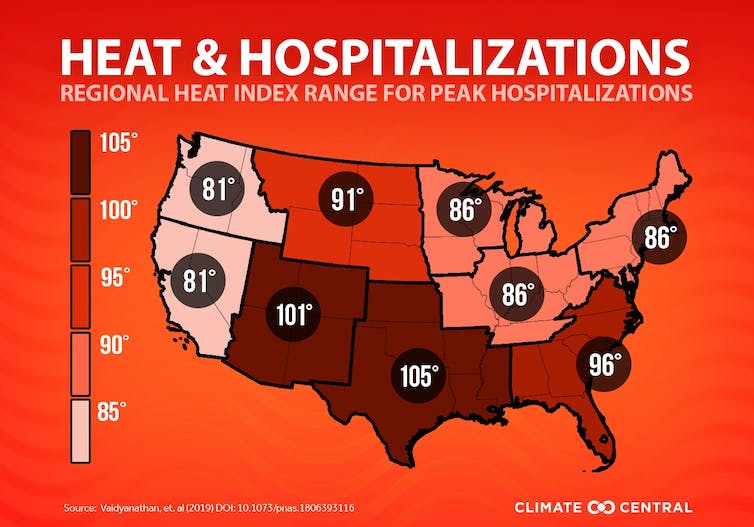 The heat index is a combination of heat and humidity. Heat-related hospitalizations begin rising at lower heat index values in normally cooler parts of the country. Climate Central, CC BY-ND

At the same time, efforts are underway to diversify the sport landscape and provide equitable access to sport and recreation for all people. A vicious cycle spins between social justice — efforts to diversify sports — and environmental and climate justice, in which the most vulnerable communities face the greatest climate harm and health risks but are underresourced and ill-equipped to adapt to the changing climate.

Sports leagues and athletes have taken a stand on many social issues, but they are often reactive when implementing and advocating for change.

For instance, leagues implemented regulatory policies regarding brain safety only after countless tragedies. People began to focus on traumatic brain injury and chronic traumatic encephalopathy after the deaths of numerous NFL players and a blockbuster film.

The heat-related deaths of collegiate and NFL football players, notably Minnesota Vikings player Korey Stringer, have drawn some attention to the risks. Tokyo 2020 Olympians and FIFA World Cup organizers have cited the need for regulatory changes because of the effects of extreme heat on athlete health. But it’s often only after a tragedy that improvements are made to protect young athletes from heat illness. 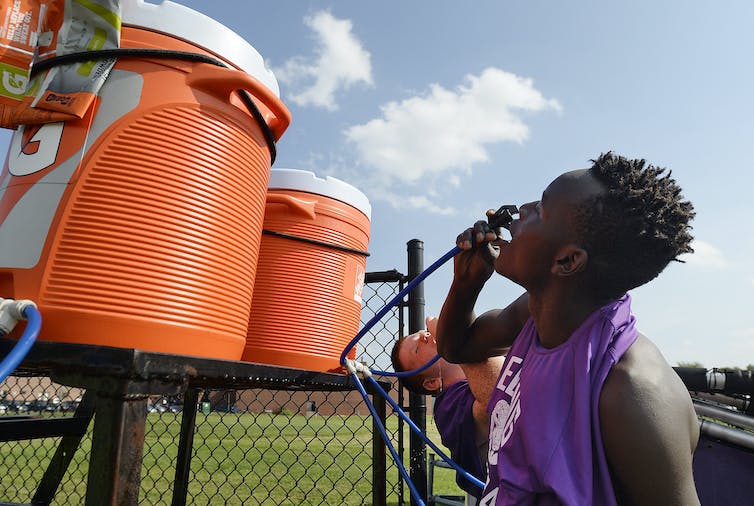 Requiring breaks that allow athletes to cool off can save lives. Shawn Patrick Ouellette/Portland Portland Press Herald via Getty Images

The sport sector can make immediate practical and policy-related adaptations to extreme heat to protect children. These include modifying practice schedules, increasing the number of water breaks, revising athletic heat policies to reflect climate change, and implementing procedures to ensure compliance by coaches and athletic administrators.

Jessica R. Murfree is also a member of the Sport Ecology Group.

Natasha Brison does not work for, consult, own shares in or receive funding from any company or organization that would benefit from this article, and has disclosed no relevant affiliations beyond their academic appointment.

This article is republished from The Conversation under a Creative Commons license.

Up your fan game

Close your windows during the day

Chill your sheets before bed

Get the daily forecast and severe weather alerts in your inbox!

7 Most Shocking celebrity legal fights of 2022

What’s the price of grief?