The CHP Incident Page is reporting a two-vehicle collision in Arcata along Highway 101 near the Sunset Avenue offramp. The accident was reported just before 5:30 p.m. on July 26th.

Occupants from both vehicles are outside of the vehicles, one reportedly with blood on their person. An ambulance has been requested along with a tow truck.

[All photos by Lisa Connell]

A Redheaded Blackbelt reader said that traffic is moving slowly through the area while the CHP Traffic Incident Page stated that traffic was backed up to Highway 299. The #2 lane was reported to be blocked by fire personnel at 5:42 p.m. 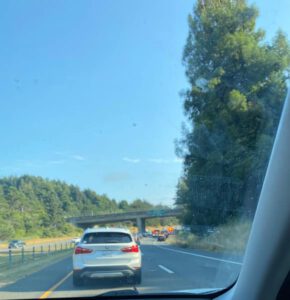 Update: The CHP is now listing this as a major injury accident with two subjects being taken to a local area hospital.

Please remember that this story is unfolding. Information is being reported as we gather it. However, some of the information coming from witnesses and initial official reports could be wrong. We will do our best to get the facts but, in the case that something is inaccurate, we will update with correct information as soon as we can.