A Brazilian anaesthetist accused of raping a sedated woman during a C-section is feared to have carried out five similar attacks.

Giovanni Quintella Bezerra, 32, was arrested in Rio de Janeiro on July 10 after nurses became suspicious of his behaviour during two C-sections that day and secretly recorded him during a third – when they allegedly caught him assaulting the patient.

Police, who were already investigating whether the first two patients were attacked, now say another three women treated on different days have come forward to accuse him of abusing them – bringing the total to at least six.

Bezerra appeared in court for the first time Tuesday, where a judge sentenced him to indefinite detention in solitary confinement while the case is investigated.

He has been locked up at Bangu – Brazil’s largest prison complex to the west of Rio which holds some of the country’s most dangerous inmates and has a reputation for violence – where prisoners booed and banged cell bars as he arrived last night.

Giovanni Quintella Bezerra, 32, is being investigated for raping up to six pregnant women he had sedated during C-section operations at two hospitals in Rio de Janiero 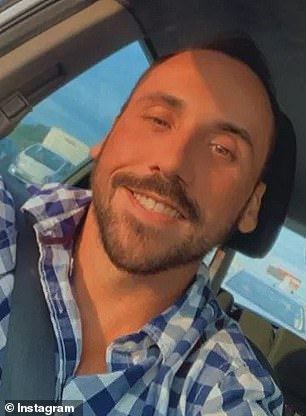 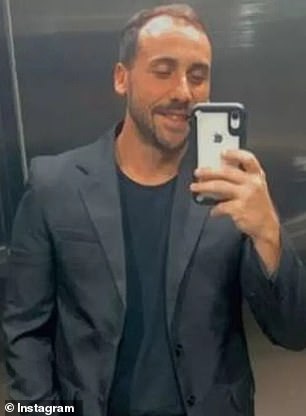 Bezerra (left and right) was arrested on July 10 after suspicious nursing staff secretly recorded him during a C-section, capturing what appeared to be 10 minutes of oral rape

Separately, it was revealed that Bezerra is facing a medical malpractice lawsuit from 2018 – before he qualified as an anaesthetist and was working at a different hospital.

Bezerra and another doctor are accused of misdiagnosing a case of swine flu as a urinary tract infection, causing the female patient to fall into a 23-day coma.

During the coma, the patient lost her big toe, sustained severe damage to her Achillies tendon, and lost a large amount of her hair.

The patient had arrived at hospital with ‘delusions, chills, difficulty breathing, shortness of breath, coughing and dizziness,’ and was told she was suffering from a UTI which was treated with antibiotics, Globo newspaper reports.

The first doctor to treat her allegedly ignored warnings to test for more-serious ailments and discharged her, but she quickly returned when her condition worsened.

It was then that she fell into the care of Bezerra, who reinforced the first diagnosis and put her symptoms down to ‘anxiety’ saying she was ‘physically fine’.

That is despite the fact the woman was suffering severe headaches, back pain, was coughing up blood and had intense shortness of breath and lung pain – prompting medical staff to seek another opinion. 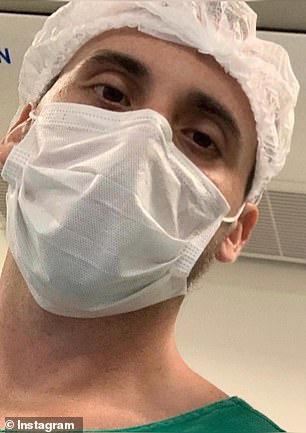 The patient was bounced through another doctor until a fourth correctly diagnosed severe pneumonia, and discovered she had just 25 per cent lung function.

By this time, the woman was suffering from vision loss due to lack of oxygen, had problems moving, numbness, and ‘disorientation in time and space.’

She had to be placed into a coma for 23 days while she was treated for blood clots that had reduced the flow of blood to her body.

While in the coma, she lost her right big toe, sustained damage to a nerve in her right knee, and saw her Achilles tendon degrade to the point that it had to be reconstructed later.

She also suffered muscular dystrophy from being unable to move around, lost some of her old memories, and lost most of her hair.

A case has been brought for medical malpractice, with investigations in the early stages. Neither Bezerra nor the other doctors involved have submitted a defence.

Bezerra has since qualified as an anaesthetist – only passing in April this year – and has now been accused of using his new position to carry out at least one, and possibly a series of, horrifying rapes on pregnant women.

In the case which prompted his arrest, Bezerra allegedly heavily sedated the woman who was undergoing the C-section to the point where she was barely conscious.

Such levels of sedation are uncommon during routine procedures and are typically only used on patients in distress or where they may resist attempts to operate on them, experts told Globo.

As surgeons got to work on delivering the baby, Bezerra is said to have positioned himself near the woman’s head – with his gown arranged in such a way that the rest of the team, working just feet away, could not see her from the neck up.

He is then said to have orally raped her for 10 minutes – even intimidating a nurse who tried to get close. 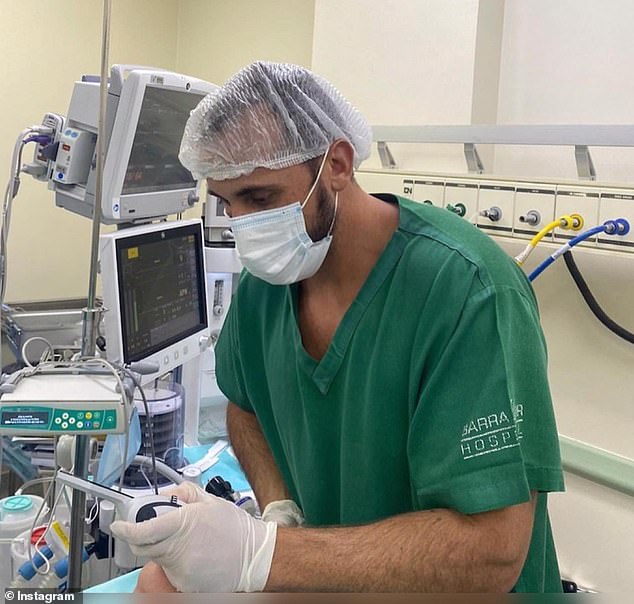 The 32-year-old only became and anaesthetist in April, having worked as a doctor since 2017 – and is facing a medical malpractice suit for misdiagnosing a woman in 2018

But, unbeknownst to him, nurses who had become suspicious of his behaviour during two earlier C-sections the same day had set up a phone in a nearby glass cabinet to record him during the surgery.

Reviewing the footage afterwards, the women saw Bezerra moving his arm back and forth as if pulling the woman’s head towards his crotch and pushing it away again.

At the end of the ‘attack’, he was recorded cleaning the woman’s mouth with gauze.

It was then that nurses called police, telling officers that they began to suspect Bezerra a month before because of the unusually heavy amount of sedation he used.

During the two surgeries earlier that day, the women said Bezerra’s odd habit of positioning himself near the patients’ heads had caused further concern.

One even claimed to have noticed he was aroused during the procedure.

Interviewed later, the woman whose attack was caught on film said she recalled the incident – but thought she had been hallucinating.

Her husband – who was sent out of the room during the delivery – said he had no idea about the attack until he saw Bezerra on TV after he was arrested.

The case instantly made headlines across the country and around the world, prompting three more women – including one from a different hospital – to come forward saying they thought they had also been attacked.

Officers are now collecting evidence, including the medical gauze Bezerra used to wipe the third patient’s mouth which nurses recovered from the rubbish and which they believe may contain DNA evidence.

Vials of sedative used during the surgeries have also been submitted as evidence, and police have seized the doctor’s phone.

Bárbara Lomba, head of the federal police office investigating the case, says Bezerra’s pattern of behaviour indicates he is likely to be a serial attacker.

‘He is resourceful, does not show much concern when committing the crime… There is an abuse of power,’ she told local media. 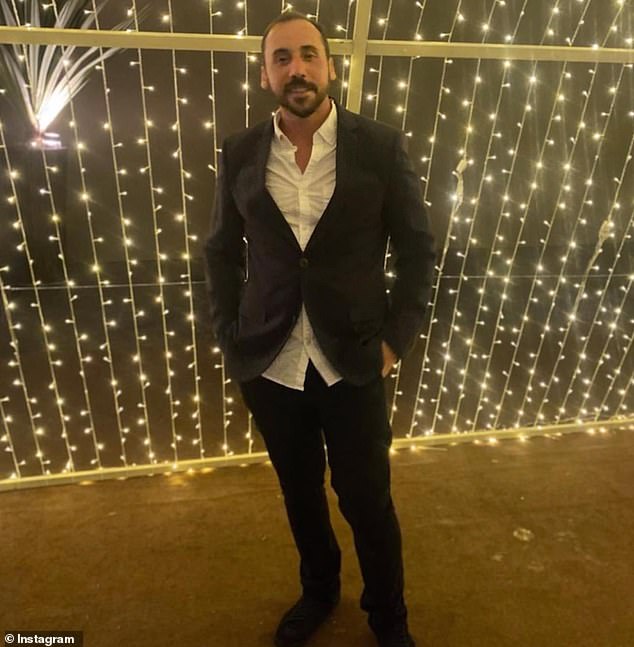 She said investigating officers will not be performing a psychological evaluation, because the fact that he was able to hold his job is a clear indication he is sane.

Appearing in court for the first time on Tuesday, the magistrate gave a damning verdict as Bezerra was told he will stay in jail indefinitely as cops build their case.

The detention will be reviewed every 90 to decide whether more time is needed.

‘In a birth where the woman, in addition to being anesthetized, gave birth to her child – in one of the most important moments of her life – the custodian, using his profession, violates all the rights she had over herself,’ the magistrate said.

‘The day of her son’s birth will be marked by the trauma resulting from the brutal conduct he practiced, which will be remembered on every birthday.’

Bezerra will be kept in Bangu, Brazil’s largest jail complex to the west of Rio where some of the country’s most notorious and high-value prisoners are kept.

The prison has a well-worn reputation for both violence and drug use among inmates, and is said to be run by the notorious Commanda Vermelha gang.

Those locked up there include drug traffickers, murderers and cartel leaders, with riots in 2004 leaving 30 people dead.

The following year, a security official was murdered while on duty there – becoming the fifth to die in five years.

Bezerra arrived there at 9.15pm on Tuesday evening, watched by TV cameras which captured the sound of inmates booing, banging their cell bars and jeering at him.

Social media posts uploaded by Bezerra before his arrest reveal a vain man prone to bragging who often posted pictures of himself in medical scrubs from inside the hospitals where he worked.

‘I’m here to reap the rewards,’ reads the caption on one such photograph.

Another says: ‘You’ll still hear about me, wait.’

Can You Sue for Pain and Suffering in Mississippi?