In the era of political bitterness, the Fresno County Republican and Democratic parties found something they agree upon — opposition to Measure C.

The $7 billion sales tax for county transportation is on the ballot this November for a 30-year renewal (2027-2057). It needs a yes vote from two-thirds of Fresno County voters to pass.

Both local party organizations voted to oppose Measure C at their respective meetings this month. Both cited the economic toll.

“Because of rising inflation, the dollar is losing its value on a daily basis. At the same time prices for food, gas and other necessities are increasing at one of the fastest rates in modern history. As a result most voters are very concerned about financial issues. Bonds and measures that require taxes to be raised are not popular at this time of economic uncertainty,” Fresno GOP chairman Fred Vanderhoof said.

After hearing a presentation from Fresno City Councilman Miguel Arias, community activist Sandra Celedon and others, the Democrats voted to oppose the measure.

While the party has not made an official statement, the No on Measure C website argues higher taxes “will just make it harder to pay for basic needs.”

Karbassi Says He Will Appeal Loss in Defamation Case

Fresno City Councilman Mike Karbassi sued Soria — both Democrats ran in the June primary for a state Assembly seat — claiming that a campaign mailer Soria sent during the campaign lied about him. Soria advanced to the general election and will face former Merced County Sheriff Mark Pazin.

Soria filed an anti-SLAPP motion, which argued that sending the mailer was within her First Amendment rights. Gaab agreed, finalizing a preliminary ruling made two weeks ago.

The controversial mailer showed an image of Karbassi along with headlines about committing assault. The reverse side revealed it was a consultant Karbassi hired that was guilty of the crime.

In arguments made to the court, Karbassi’s attorneys said that constituted defamation. Gaab disagreed, saying the flyer must be read as a whole.

Karbassi said he will appeal.

Mike Karbassi represented the city along with City Manager Georgeanne White on Thursday, to celebrate with members from the Mexican consulate, based in Karbassi’s northwest Fresno district.

A color guard from the University of Baja California raised the flag — and lowered it to half-staff to be at the same level as the American flag, to honor the U.K.’s late Queen Elizabeth II.

The Mexican flag flies at Fresno City Hall along with the U.S. flag. (GV Wire/David Taub)

Ceremony Was Scheduled Prior to a Council Meeting

The ceremony was scheduled to take place the same day as a City Council meeting. The meeting was shelved because too many councilmembers were unable to attend.

In an ironic response, Councilwoman Esmeralda Soria’s chief of staff Gilbert Felix, said to “call the office” when asked about Soria’s whereabouts for the day.

Councilman Miguel Arias posted on Twitter that he was at a housing conference in downtown Fresno. He previously said he also had a personal obligation to attend to as well during the day that would prevent his council meeting attendance. 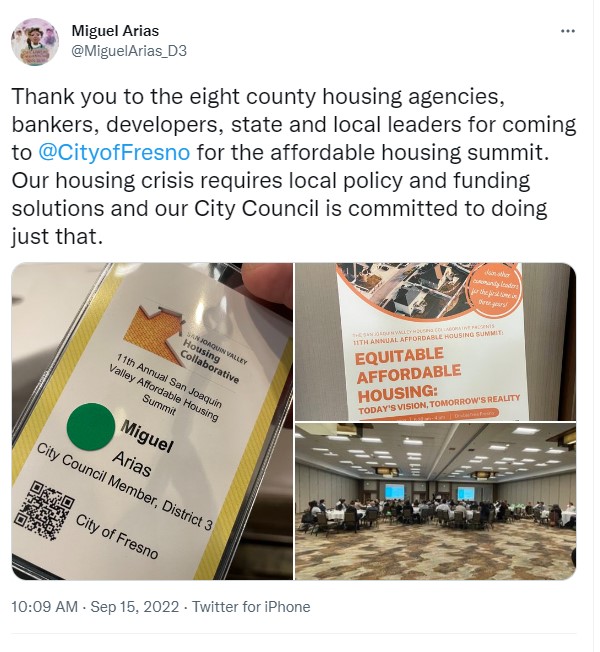 Tweet from Councilman Miguel Arias at a housing summit on Sept. 15, the same day as a since-cancelled City Council meeting.

Last week, Politics 101 wrote about when Assemblyman Joaquin Arambula, D-Fresno, may be term limited. Voters approved a change to the state Constitution in 2012 (Article IV, Section 2) that set a strict 12-year limit for someone to serve in either the Assembly, state Senate, or combination of both.

Arambula won a special election and took office in April 2016. In theory, his 12-year mark would come in the middle of a term. Based on Prop 28, a legislator cannot run if the term would put them over the limit.

That would seemingly mean Arambula’s last chance to run (assuming he wins this year) would be 2024. His campaign pushed back on that notion.

Upon further review, they may be correct.

Researching the issue and talking with state election experts, there is another provision of the state Constitution (Article XX, Section 7) — approved by voters in 1990 — that exempts partial terms from calculations of strict term limits. As long as the partial term is less than half (and Arambula fits in that category), he could run two more times after this year.

When supporters of Prop 28 advocated for term limits, they addressed the loophole of partial terms. However, because the law did not change Article XX, it is likely to fail in any potential court challenge.

Rupert Murdoch to be deposed in $1.6 billion defamation case against Fox