Steve Hackett Revisits the Roots of Genesis’ Seconds Out and More on Vinyl Both Virgin and New, Part I

Hackett: I have to say, this revisit of Seconds Out — which was a revisit in itself of much of the Seventies and the classic material of Genesis at that time — compared to the original just in terms of audio quality and in terms of accuracy for me, the original sounded very close-miked. Very accurate, yes, but would I change the guitar sound? (slight pause) Yes, I have!

Mettler: I think we can be honest in saying it seemed like you were less “present” in the mix on the original Seconds Out. When we hear that material played live now, there’s very much a difference of tone and character.

Hackett: Yes. Even the picture itself [i.e., the cover photo] — I’ve seen the original of the picture, and [photographer] Armando Gallo said the band asked if I would be made into a virtual silhouette (MM laughs) as opposed to, you know, standing there in the forefront.

I know Tony [Banks, aforementioned Genesis keyboardist] has joked that they mixed me out of it. I don’t think that was entirely true, but I can hear the guitar on that album.

I can also say I’m more proud of my contribution towards it now — the Revisited album, I mean — to honor everything. I have no agenda, for instance, to make the keyboards quieter. Why would I do that? (both laugh)

Mettler: I think Revisited sounds like what we hear from you live, which is key. Is there one track from that Seconds Out sequence of the record you feel is the better example of a song that appeared on the original live album?

Hackett: Well, absolutely! I would say, the version of “Cinema Show” is. It’s funny — I was just watching it on Blu-ray today, reacquainting myself with the performance, and the clarity on it is astonishing. As far as I’m aware, there weren’t any fixups, so it’s “what you see is what you get” — and I think it’s mightily good. It’s a great tune, and it goes absolutely ballistic. It looks wonderful, and it sounds wonderful.

Mettler: And it builds up almost orchestrally, in a sense.

Hackett: Yes — chorally, and orchestrally. It’s got those dynamics — something that starts not from a whisper, but a little tinkle. Something that might start almost apologetically, and in an introverted sense. It goes from personal to being as universal, I think, as we could make it then.

And I’ve been working hard on the sound mix of that song live, too. There’s a glorious technical moment where you get the instrumental theme coming in with the voices and the bass pedal to where Roger [King, keyboardist] and Jonas [Reingold, bassist] are twinning it. It’s a magnificent sound. I’m virtually a rhythm guitarist on that one.

[MM notes: “The Cinema Show,” which appears here as Track 1 on Side G, was the first track on Side Four of Seconds Out. It originally appeared as Track 3 on Side 2 of Genesis’ October 1973 studio album, Selling England by the Pound.]

Mettler: What I like about that segment of “The Cinema Show” is you know when to step back and let everybody else have a moment, because while your name is at the top of the marquee, everybody in the band gets to participate. A lot of times, we don’t get to see or hear that with other marquee names.

Hackett: Well, that’s right. I think when you’ve got a band that are playing at this level, there’s no point having anyone hide their light under a bushel. They are a team of virtuosos, and I’ve gotta give them their head to be able to show their chops, which are mighty in the extreme.

If you could only hear what they do sometimes in soundcheck — it’s extraordinary. It’s a jazz band meets a rock band meets a classical ensemble. I sometimes hear Jonas playing Bach on the bass, or playing jazz rock on bass — how the hell can you play that fast? How is that possible? He’s a finger player, but he’s a plectrum player too. Me, I use fingers. That’s what I do these days. I moved onto fingers, quite a long time ago.

Mettler: There’s one sequence earlier in the record that has some of that interplay on it — a recent solo track of yours, “The Devil’s Cathedral” [Track 1 on Side B here; Track 5 on his September 2021 studio album, Surrender of Silence]. You can really hear the subtlety of what’s going on at the outset that I think would be lost if it wasn’t performed as well as it is, in addition to being QC’ed so well on the back end.

Hackett: Yes, yes! And although we’ve got the idea of a pipe organ meets soprano sax — which is a highly unusual combination of arguably sacred and profane instruments (MM laughs) — it’s entirely improvised when they [keyboardist Roger King, and sax player Rob Townsend] play together, they’re playing octatonics and diminished runs, and I’m surprised every night just how fiery that can get sometimes. It’s amazing to me. Of course, that has a “length” — they agree to stop on, virtually, on a nod. It’s complete telepathy. And then we’re into Roger’s section, which he’s arranged himself, based on some of those Messiaen interludes.

And then there was the song proper, which is kind of in a Genesis tradition, but has the addition of the brass aspect. It does that “thing” — it climbs up, climbs up, and reboots itself — but it’s demonic. It’s devilish to play, but it’s also in the Genesis tradition in terms of being a story of a character, and his unbridled ambition.

But the main thing is that it works, just as an experience. Live, it’s an assault. It goes heavy metal at times, but we have moments where we break it down in order to come at you again. There’s no point in being the full assault. It has to regroup.

Mettler: Yeah, it’s assault, and battery, and some robbery is thrown in there too.

Hackett: (laughs) Yes, Robbery, assault, and battery indeed. [We are cheekily referencing the Genesis song “Robbery, Assault and Battery” — Track 3 on Side C here, Track 3 on Side One of Seconds Out, and originally Track 1 on Side 2 of the band’s February 1976 studio album, A Trick of the Tail.]

Mettler: Obviously, it’s worth discussing the version of “Firth of Fifth” that’s on here, which I feel is another definitive live moment. I know you play it often and it’s been in other sets and other solo live releases of yours, but to me, it’s the definitive moment of when we get to that side of this record [i.e., Track 2 on Side D]. Tell me about playing that song in Paris for Seconds Out 45 years ago [in June 1977], and then playing it today. What do you feel the things are that make this song so indelible, really?

Hackett: I was very proud of it when we did it, back in the day. It’s a great ensemble piece. I think the guitar solo is probably the most well-known Genesis guitar moment — it’s my variation on Tony [Banks]’s melody, which he originally wrote on piano. We used it [i.e., that melody] on flute. I variously re-recorded it sometimes with nylon guitar, sometimes with flute, and sometimes with soprano sax. But when it comes to the full-blown version of it, it’s as symphonic a moment as is possible in rock.

It’s a glorious melody in the first place, and I was able to solo on that for something like three or three-and-a-half minutes — which was unusual in that time of Genesis. It was great to be able to sort of hold the floor with that solo, and I love playing it.

Mettler: Did you know you’d be able to play for three-and-a-half minutes on “Firth of Fifth” originally? Or was it just an organic thing, like it just felt like the song could continue at that length?

Hackett: It was organic. It worked very well. I think Tony was very proud of it. He wrote to me not that long ago, saying he thought it was wonderful, and that that interpretation is great — which is nice.

And, as you know, I’m a huge fan of the writing, you understand. We all got a chance to write — some of us more occasionally than others, but the lovely thing was, there were lots of moments on Selling England when guitar was important — not just 12-string, but electric guitar, and none more so than in the first track [on Side 1], “Dancing With the Moonlit Knight,” where we were able to fire salvos across each other, and have the music change from playing the song to fusion, and back again. It doesn’t sit still for a minute. Fabulous drumming to be able to take all those disparate, various strands and make it swing, which Phil [Collins] did. It’s no mean feat to take everyone’s ideas, and make all those things work.

We were listening to Mahavishnu [Orchestra, the pioneering jazz fusion band led by guitarist John McLaughlin] then, and I think we were giving them a run for their money at that point in time. I was the fastest gun in the west — at least for the moment it was happening. (MM laughs) I was very proud of that. 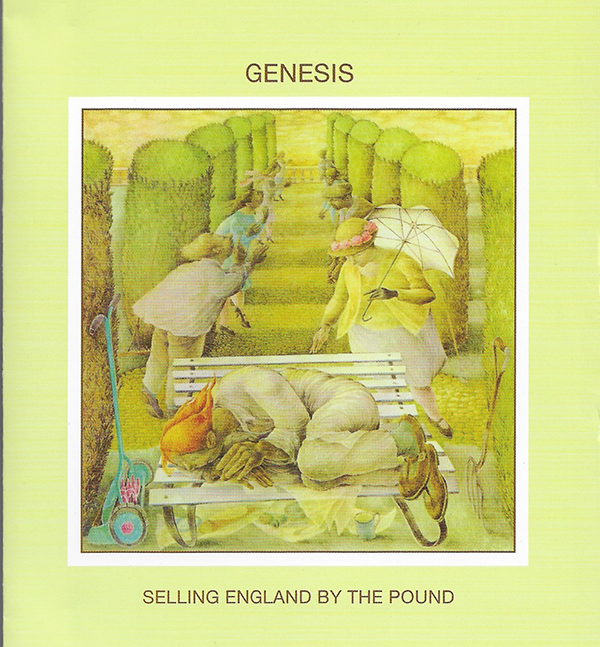 Mettler: Yeah, and the original “Cinema Show” is on Selling England as well [Track 3 on Side 2], so we get to hear the literal genesis of how it went from almost 50-ish years ago, to now. And since we’re talking about vinyl, could you quantify what you feel the best Genesis album from that era is on vinyl, from your point of view?

Hackett: I would say, when we were doing Selling England by the Pound, I was the guy in the band — and the others didn’t seem to wanna do this — I would be there at the cut. We were due to put something like 29-and-a-half minutes on one side, which was unheard of! But at that time, because there were so many acoustic moments, we were able to make that happen, you see?

Mettler: Yeah, it was a less dense side overall.

Hackett: It was less dense, yes. Bass frequencies are what take up the room in the grooves. The ideal length for sides at that time was 18 minutes per side. That was it, to get maximum bass, and all the rest.

Instead, what we did was flying in the face of fashion at the time — but it was possible. I’m very proud of the way that Selling England album came out. I think that it sounded very, very good on vinyl — and still does. I mean, I can’t count every pressing and whether it’s virgin vinyl, or recycled, or whatever you call it. You cannot apply quality control to every copy that’s out there. I’m not God — but I’d let ’em through the Pearly Gates for that one, you know? (both laugh)

Next week: Hackett reveals exactly how Genesis was able to fit all 23:06 of “Supper’s Ready” as Track 2 on Side 2 of October 1972’s Foxtrot without compromising the quality of the mix or the breadth of the music — and much, much more! 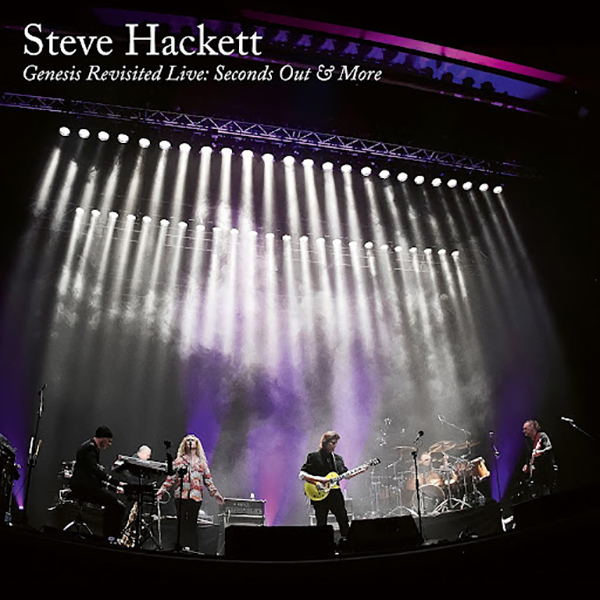 [Note: 2CDs are also included in this package]

3. Held In The Shadows

2. Shadow Of The Hierophant

2. The Lamb Lies Down On Broadway

1. Dance On A Volcano

Man indicted in shooting death of stepfather – The Suffolk News-Herald