Two former Laurens County Detention Center officers were arrested Thursday and face charges stemming from two incidents involving an inmate when they worked at the Johnson Detention Center this past April.

According to the South Carolina Law Enforcement Division (SLED), Randall Jones Sammons, 43, of Duncan and Steven Chad Wix, 31, of Whitmire have been charged with third-degree assault and battery and misconduct in office. Sammons and Wix were booked into the detention center where they once worked Thursday.

According to the warrants signed Wednesday, Sammons and Wix “initiated and engaged in two different physical altercations” with the victim on April 22. Both incidents were recorded on the officers’ body-worn cameras, the warrants reads.

The warrants also read that in the first altercation, Wix repeatedly struck the victim with a closed fist, and during a second altercation Sammons used an electrified G.L.O.V.E. deterrent device to shock the victim multiple times. 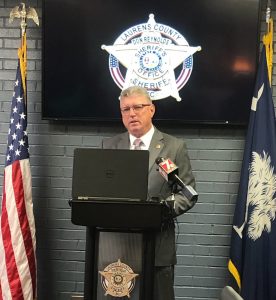 Reynolds said Thursday that the two officers were fired as soon as the incidents were discovered.

“My deputies periodically check the videos to keep everybody in line, and when they observed what they observed, they called me,” Reynolds said. “When I observed it, I terminated the two employees, and I called SLED immediately. There was no hesitation on any of our parts to do the right thing, and we apply this every time and in turn SLED followed up with their investigation.”

Reynolds also said the conduct of the two former officers “violated anything that I stand for and as far as the professionalism and the policies and protocol that’s in place.”

The case will be prosecuted by the state Attorney General’s Office.

This is the second SLED investigation into a major incident to occur at the county detention center in the past year. Jarvis Johnmichael “Mikey” Evans, a 44-year-old Enoree man with a reported history of mental illness and drug addiction, died while in custody at the detention center on July 29, 2021.

Evans’ family is suing Reynolds and the Laurens County Sheriff’s Office in connection with his death.

A video released in August by the Charleston-based attorneys representing Evans’ family tells showed bodycam footage of Evans being dragged while cuffed with his hands behind his back as he protested and told deputies “you’re trying to murder me” while being booked into the jail.

He was tasered three times as he was being placed in a restraint chair with a “spit mask” over his head while surrounded by at least a half-dozen deputies. He spent over an hour alone in a room in the restraint chair before officers found him dead.

After the lawsuits were filed by Evans’ family, Reynolds released the following statement: “Following the incident that occurred on July 29, 2021, I requested the South Carolina Law Enforcement Division to respond and conduct an investigation into the matter,” the statement read. “Additionally, our Office of Internal Affairs conducted a separate and internal investigation. At this time, I can confirm that my office has been served with a lawsuit pertaining to that incident, and in an effort to protect the integrity of such proceedings, we will not provide any further comment. Our attorney will respond to the formal complaint in the near future.”